How to create and debug a process automatically on windows

Recently I had to write a custom loader which will dynamically retrieve a bunch of informations (loaded modules list, imports, etc.) for several hundreds of executables. The first way involves to launch every exe with cdb and cry when it comes to write windbg scripts in order to exports the needed infomations (I’m not frankly excited about their new shiny Javascript scripting engine built for windbg ). The other way is to write a lightweight debugger using specific Windows API.

Guess which way I went ?

I felt to write a blog post about it since the functions used here (psapi basically) are confusing to use and sometimes overlapping. Finally they are not as well documented (particularly on error cases) as the rest of Win32 API. Here a tutorial on how to retrieve (as in rva, not statically) the base module address and entry point of an executable.

This approach has two problems :

Firstly, CreateProcess does not have a way to prevent the created process from running. Unless you have a way to control the created process (since you have the source for example) most binaries will just exit before our program is able to look into their memory. Because of this issue, we can only use this method on executables with a message pump (GUI, servers, etc.) which will prevent them from an early exit.

Secondly, the process identifier returned in PROCESS_INFORMATION.dwProcessId may not always be the created process PID ! 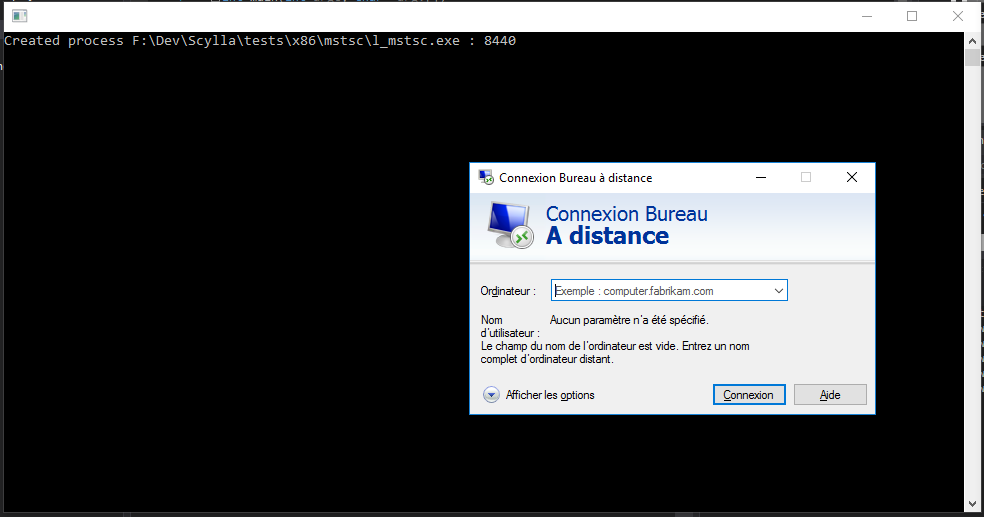 For some process, the returned PID (8440 in the example) does not refer to the created process PID (10400) but it’s parent. I did not exactly pinpoint the root cause of this behaviour, but nevertheless it’s pretty annoying to handle : we need to iterate over every running process and find which has our PID as a parent.

Anyway, not a good way to go.

CreateProcess have a bunch of creations options : Process Creation Flags . CREATE_SUSPENDED is an interesting one :

Basically we can’t create any process and get back our informations whithout running it. Unfortunately, reality is not as nice.

We don’t have any informations since nothing has been loaded ! CREATE_SUSPENDED is useful for separating the process creation from the process run, not for our use case.

We need to do the whole system initialization (system dll loading, x86/x64 emulation layer init, etc.) and stop on a System breakpoint. That’s why we’re going the debug way.

The only “proper” way to do it is to write a simple debugger which can allow the debugged process to do all the loading and stop just before jumping in to its entry point. Here is the code necessary :

The last method is not a silver bullet. Some limitations I’ve noticed :