Python 3 is almost 10 years old. If its adoption has been long and arduous, now it’s recognized that Python 3 will end up supplanting Python 2.7. However, if most of the popular libraries already are Python 3 ready, that’s not the case for the rest of the tail.

While there is a trove of fantastic RE tools written in Python, most of them are written for Python 2.7. This is partially explained by the fact that the reverse engineering community had a significant “old guard” that still insist on using Hiew, SoftIce and VC6 when reversing code (along with software “jocks” activating every experimental security bells and whistle for fun and profit). I also hold HexRays partially responsible for this situation since they keep on shipping IDA without any Python3 support (maybe in the v7, who knows ?).

pdbparse is a really useful Python module/script for parsing PDB files (debug symbols files on Windows) especially on a Linux host. It’s pretty much the historical goto solution across the RE board. Problem though, it’s becoming deprecated (the project is 5 y.o) and there is only a Python 2.7 build available. What following is my adventure into attempting to “resuscitate” a Python2 legacy project and hopefully a tutorial for others.

NB : This cheatsheet from the future people is awesome when dealing with Python2/3 compatibility issues

You will want to switch python versions and have several concurrent build to check for non-regressions.

Problem in this particular project : there is a C extension for demangling C++ names. Which means we also need the Visual Studio and GCC compiler corresponding to each Python versions.

WSL really shine here : I could manually test my modifications on the 4 virtualenv on the same Windows host !

However that is not sufficient to build the C extension since the module extension definition format has evolved between Python2 and Python3, now we need to define a PyModuleDef structure and a PyMODINIT_FUNC entry point in the C code. Thankfully I’ve some experience tinkering with Python modules, otherwise I would have thrown the towel before even started porting the actual Python code to Python 3.

Usually it will catch the following syntax errors :

if you’re not really familiar with the library or there is no test suite, play around with the modules and see what breaks.

And that’s where the “fun” begins.

Usually, a dev writing a Python 2.7 library will not discriminate between bytes-like buffers and ASCII strings (since the language doesn’t either) which means to have to code review everything str operations and ask yourself if there is a bytes operation implied or is it really a string one.

Moreover there are catchable errors, but also silent bugs :

pdbparse is among the worst offendants I’ve seen since, as any parsing library, it will happily handle and transform bytes-like data as string.

Examples found in the wild :

As a side note, I’m kinda bummed out that Python devs decided not to backport Python type hints in Python2.7. That would have been an fantastic tool to explicit which type of str/bytes buffer expected as input or output. Instead I wrote it down in the functions’ comments, javadoc-style :

Writing unit tests for a parsing library is difficult (not to mention tedious), and doubling so for PDB since it’s a complex file format embedding several “streams” of file informations and carries a lot of deprecated features. As an example, nowadays every PE executable embed Codeview debug infos in a RSDS header, there is no NB_09/NB_10/DEBUG_MISC header used anymore.

The LLVM project has a test executable llvm-pdbutil which can produce pdb files based on a yaml specification. That should be a good idea to use it for a test suite, but since I’m lazy I went instead for best effort and use a code coverage tool.

Step 4 : use a code coverage tool

Since I can’t prove my modifications does not introduce regressions, at least I can try to exercise every paths in the source code in order to catch the most obvious bugs. coverage is a really good Python code coverage tool. It can be run as a script and generate a useful HTML report upon completion showing you which paths were never taken. In order to cover the most ground, I mainly used three different PE & PDB : 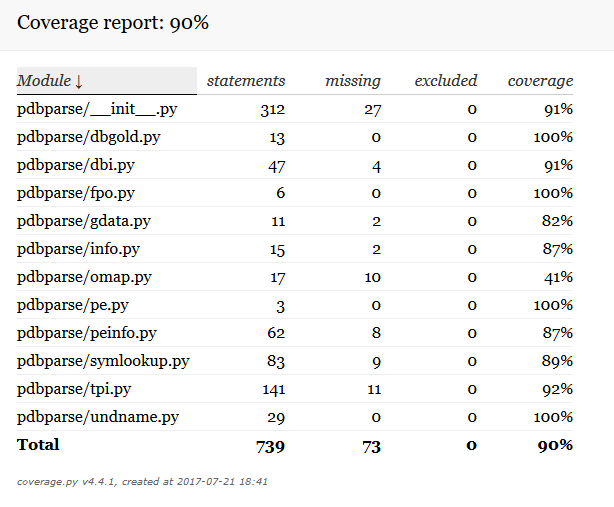 The missing statements are mostly errors branches that raise exceptions. To be honest, even if I covered most of the library I’m pretty sure there still subtle bugs in how parsed data is handled. However in my opinion, people forgive software bugs in open-source “free” libraries but less so when it’s syntax bugs, especially infuriating ones such as str/bytes incompatibilities.

Here is the coverage script:

Final Step : Make your PR accepted by the maintainer

When you’ve sufficiently confident/proud in your fixes, all that rest is to wrap it up and send it to the library maintainer in a pull request for him/her to upstream the modifications. While sending a PR on Github implies having a black-belt in Git, the last hurdle is mostly societal not technical.

There are various reasons why you Pull Request may not be accepted : orphaned project, the maintainer does not accept PR, insufficient or incomplete bug fix, need to sign NDA/CLA for sending PR, no sticking to the maintainer’s path guidelines, no test proving there is no regression, etc.

This is the last step but also the first step : before going into hacking/fixing/improving a third-party library you need to guesstimate the success ratio of your fix of being upstreamed and decide if it worth taking the shot. Fortunately in my case even though pdbparse haven’t seen major progress and new features for several years now, the maintainer do minor fixes (here is a recent example) and review PR (merged PR for pdbparse) which is a good heuristic for PR acceptation.

Also take into account that most of the public third-party tool are usually created and maintained by a single person. Moreover this man or woman probably does not live from his/her open-source work which means he/she has another full-time job and thus limited attention span and motivation to review your patch. Try to make it really palatable for them by explaining in length what the patch do, your motivation behind it, steps taken to ensure correctness and non-regression and the possible pitfalls behind your fixes. Also be patient : the maintainer has to double check your patch (which implies setting up the correct dev’s environment) and it can take weeks for your PR to be accepted.

Anyway, my PR for Python 3 support has recently landed in pdbparse’s main tree an hopefully will be present on pipy in the future.

Semi-ophaned projects like pdbparse stopped evolving along with the Python ecosystem so they tend to “accumulate” backwards compatibility issues and deprecated constructions. They also miss out on new features that can greatly simplify the code like context managers or async calls for downloading pdb. When dealing with such library, one temptation would be to digress every time we find a “code smell” in the code source. However do not forget the objective in mind : you are here to porting the library to Python 3, not to fix every bug in it (which could make the object of another pull request).

As an example, pdbparse relies of construct for parsing PDB internal binary structures. construct is also a popular semi-orphaned open-source library useful to create binary parsers in Python. After several years of sleep, the construct recently became active again which is a great news. However they recently did introduce a backward compatibility break in the API for Struct and integer parsing (in the v2.8 release). Instead of downstreaming the fixes in pdbparse, I instead future-proofed the dependency by limiting the version supported in the setup.py file (and in a separate pull request) until I’m confident the new API is stable enough. This fix really is far from perfect and it add upon Python’s dependency hell : now pdbparse probably need to be installed in a virtualenv since it is incompatible with pip’s default construct library.

Forgive me for raging, but who the fuck breaks a 5+ years old API ? construct guy, I’m really glad that you’re dusting off a really useful library but this change is way too radical. At this point you’re just giving ammunitions to people that claim that “Python is not for serious work” (well, who can blame them when you see the whole Python2/Python3 debacle ?). There must have been hundreds if not thousands of scripts and libraries depending on construct that insta-broke as soon as the users typed pip install --upgrade on their machines. If you introduce drastic breaking changes, at least update the project name to construct2 or provide a “legacy” namespace for backwards fixes : from construct import * can become from construct.legacy import * for third-party libraries that does/can not downstream your API modifications.

On a final note, I want to get backtrack on the C module used in pdbparse, undname. undname is a C source code copied from Wine that add support for undecorate symbol on Unix hosts (on Windows machines, dbgengine.dll does the work), which make them more human readable : 1394ohci!?AddConfigRomEntry@ConfigRom@@AEAAJPEAU_SET_LOCAL_HOST_PROPS3@@PEAX@Z becomes __int32 __fastcall ConfigRom::AddConfigRomEntry(ConfigRom *this, struct _SET_LOCAL_HOST_PROPS3 *, void *).

However I have several gripes with writing a C extension module for CPython. As a start, it’s hard to write correct C/Python glue code manually : you need to understand how PyArg_ParseTuple, PyArg_ParseTupleAndKeywords and PyArg_Parse works, what the correct string formats are, and how to manipulate PyObject and Py_buffer data structures. And also you need to update it every time you make a change in the API, which means you need to be also a decent software architect. The amount of Python developers that are also fluent in C and do not shy away from get their hands dirty manipulating Python logic in a low level language is vanishingly small. By writing a C extension, statistically you’re probably the only developer in your vicinity that can maintain your Python library.

There is also the whole reference counting insanity. From what I’ve understand (which is probably close to nothing) you need to explicitly tell the Python GC when it can kill temporary PyObject variables by using the Py_INCREF(x) and Py_DECREF(x) macros. Which I found incredibly difficult to do it correctly except for trivial examples. That’s probably why smart Python projects that use C code like Capstone use ctypes to provide Python bindings, and those who use C++ bindings like PyQt ends up using sip.

Building a C extension for Python (whether via ctypes, ffi, sip or natively) also greatly encumber the building process since you’re not platform-agnostic anymore. One strength of Python is it does not matter (most of the times) that the script run on a unix box or a windows one, on which CPU arch and -partly- on which Python’s minor version : this is encapsulated away by the Python interpreter. If you go native, you will need to provide binaries for every release of a new major and minor version of the CPython’s interpreter for 32 and 64-bit CPU on linux, darwin and windows platforms alike : at that point it is mandatory to plug your project to Continuous Integration tools like Travis or Appveyor, otherwise you might as well go mad maintaining dozens of builds for EACH release of your own library. Moreover on Windows the building process was historically so bad that you usually end up downloading binaries from some random guy on the Internet, over HTTP of course. And no, the python wheel file format does not protect against MITM attacks.

Personally I reserve the use of Python C extensions to specific libraries that have to rely on native performances (like numpy of capstone) or those tightly coupled to a platform (like Local KD). I told moyix, the pdbparser maintainer, my stance on undname but he finds it useful and still wants to keep it, and that’s okay since it’s his project.