Creating an Appx package without losing it's mind

I hack on my free time on Dependencies and since it’s inception I wanted to create an installer for it. Microsoft introduced along with its Windows Store a new archive format .appx to bundle applications in a publishable way, so I had a go at it.

Here’s every hurdles and pitfalls I had to overcome before managing correctly bundle my application in an appx package.

As your project grow by, there’s a point where you can’t just distribute a set of binaries in a zipped file : you need to have a installer in order to properly set up the application in a remote client. While I’ve not quite reach that point with Dependencies, I have hit some pain points :

There are a few installer frameworks out there (NSIS, WIX, MSI, InstallShield, etc.), and they have all their pros and cons but I won’t talk about it since I never attempt to write an installer using those framework. Moreover on an Insider build, a new popup recently appeared when I tried to launch a legit installer : 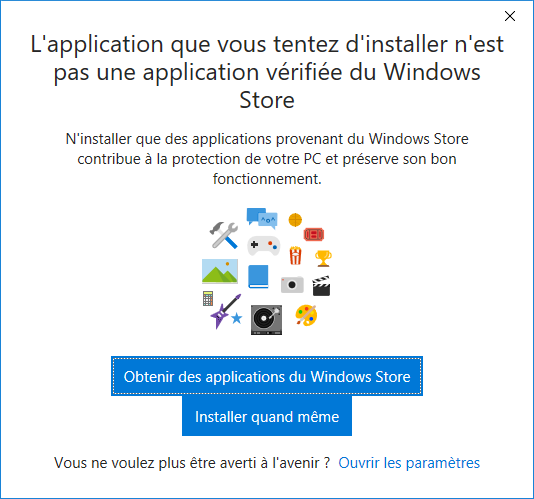 For those who don’t read French, this window is reminding the user he’s launching an exe that has not been distributed via the Windows Store. While this popup is pretty innocuous and can be disabled easily from the control panel, I still can see the writing on the wall : Microsoft will try to muscle their way into making all third party applications use the Windows Store. That’s probably the major reason why they went a great deal to implement Desktop Bridge.

The Windows Store has some pretty great advantages on paper :

My application being a frankenstein monster of C# code mixed with C++ (and relying on deep Win32 internals) it can’t published as a traditional UWP app, so I need to use Desktop Bridge. Desktop Bridge/Project Centennial is a major effort by Microsoft to convert traditionnal unmanaged Win32 applications into the new UWP paradigm. Well they had to do it since after several years the Windows Store still is a ghost town …

Creating a Desktop Bridge package is actually pretty straightforward and documented but it has some prerequisites : 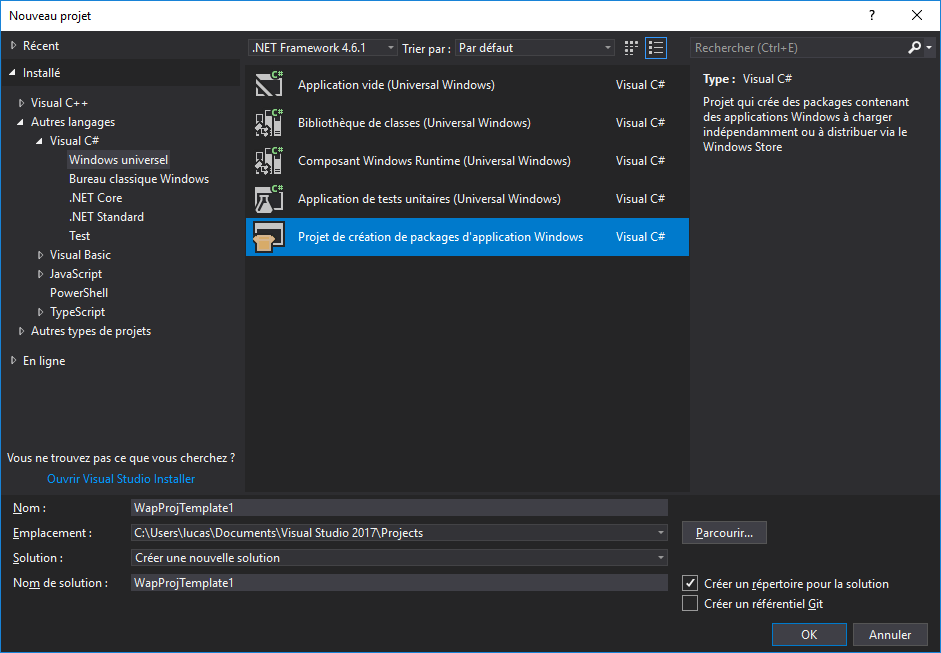 Once the correct solution has been generated, you can customize it by tweaking the Package.appxmanifest either as a xml file or via the built-in editor in Visual Studio :

One tab is particularly interesting in this editor :

UWP apps must explicitly tells which “features” they want to use, a la Android’s app permissions. Even if it may bring permission fatigue in the long run, it’s still a good idea to force the developer to think about which features he wants to use (and it may help to reduce surface attack and lateral movement). However, in my case the Desktop Bridge automatically allow the application every permission needed, thus making the whole thing moot :

The created solution will traditionally generate a test key in the form of a .pfx file for you to test-sign your package. That’s the second great idea imported from iOS/Android app system : every application must be digitally signed, even for a test release. Even if it’s a bit of a hassle to set it up, digitally sign binaries greatly simplify system audits and malware detection since the latter usually can’t sign their binary stealthily.

However you’ll need shell ~100€ for a CodeSigning certificate if you want to publish your application on the Windows Store.

Just right-click on the project solution, select build and voila ! Wait, what ? Where’s the appx file ? 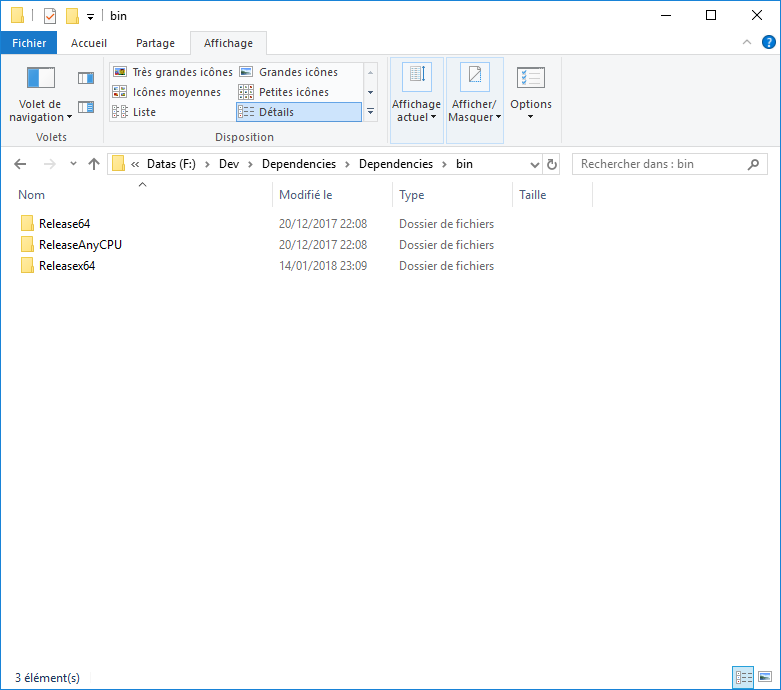 It turns out, the project solution create the release folder (Releasex64 in my case) but does not package it into a .appx file ! You need to use a command line executable which is bundled with the Visual Studio SDK to do it:

How difficult it would have been to add this as a custom build step in your project, Microsoft ?

Now that you’ve actually packaged your application, just double click on it and install it on your local test machine : 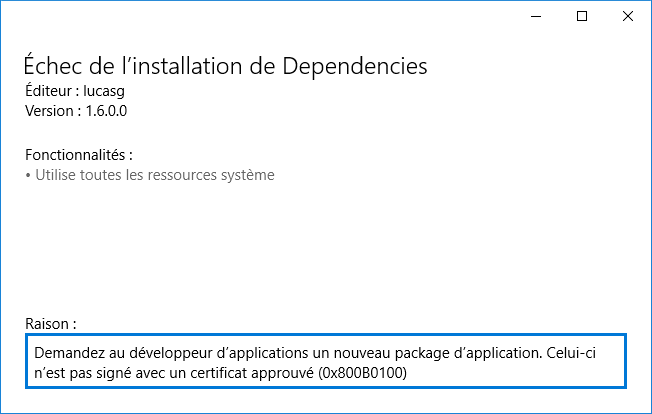 Again, for those who don’t read French, the appx installer basically tells me it can’t install my application since it’s not signed. It’s the same thing as previously : although the .pfx file has been generated by the VS project and is referenced in Package.appxmanifest, it does not automatically sign your binaries after building it (which it makes some sense since it does not even do the packaging step before). If I remember correctly, this automatic signing step is done when compiling a driver (even a test-signing one) so it’s not like it’s a major technical hurdle to set it up.

The useful executable for that step is signtool :

NB : if like me you are using a self generated key file, you need to add the certificate in your local machine hive.

Once correctly packaged and signed, your application is ready to be installed : 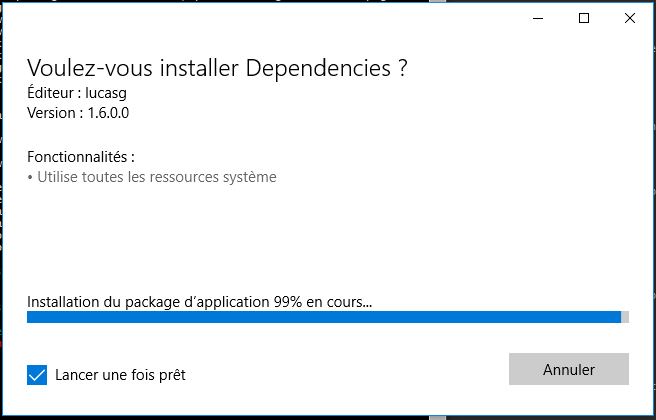 Your installed application is automatically available through the windows start menu, however logos are missing : 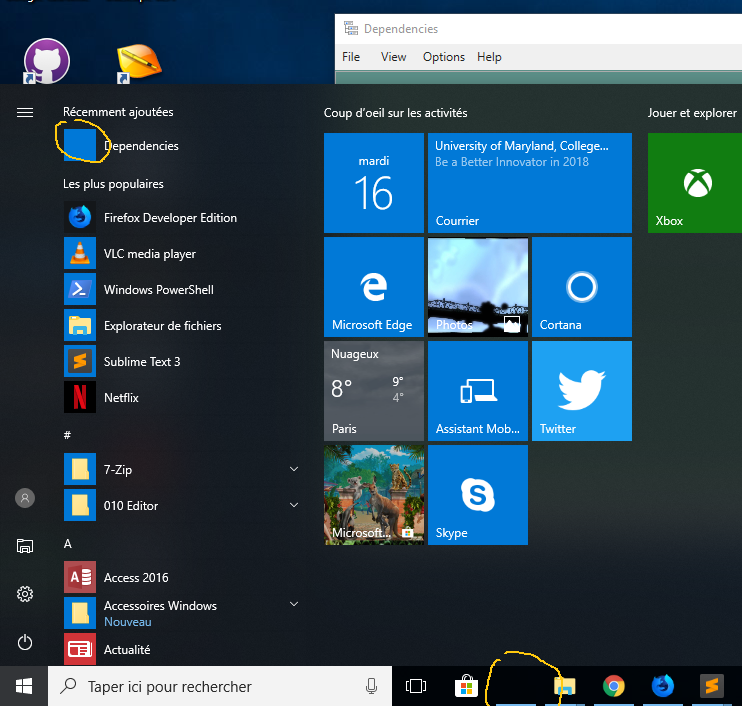 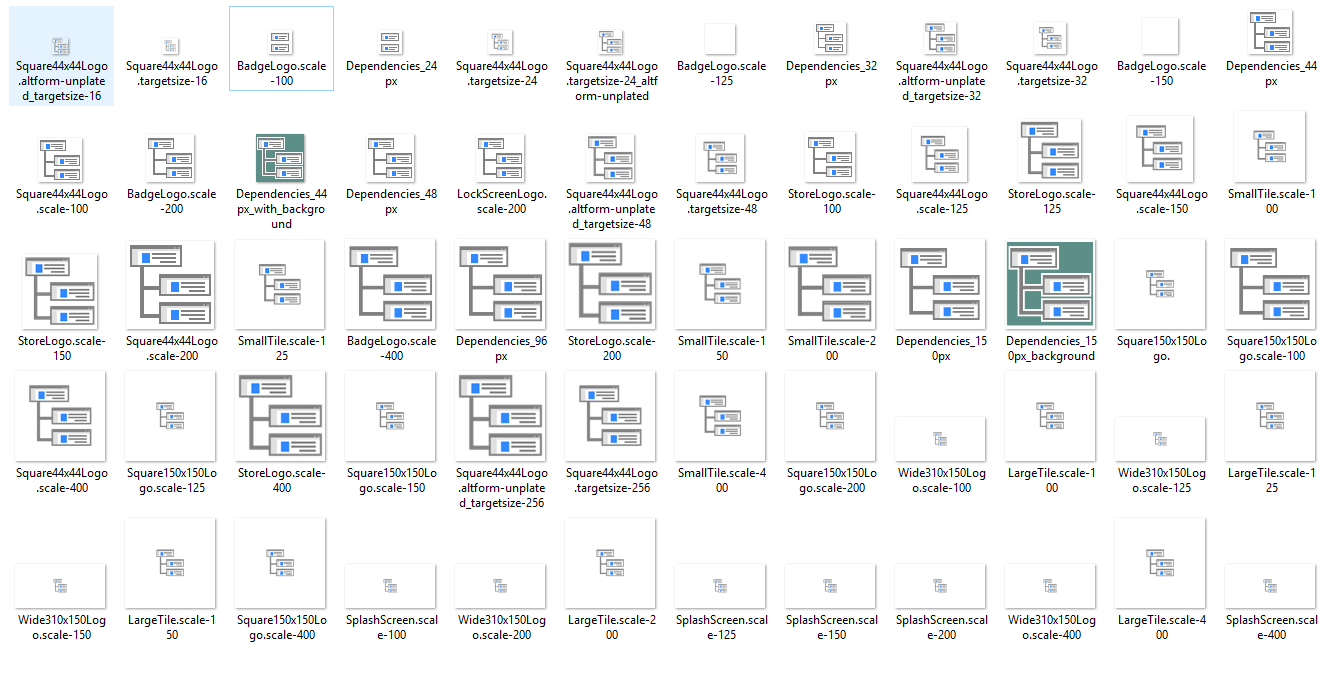 I still don’t know which icon goes where (is it the App Icon shown in the systray ? or the Badge Logo ?) and at that point I’m afraid to delete anyone. As a note, I usually place compiled binaries in a /build or /bin folder in order not to tamper with the source folders and I learned the hard way that visual assets (i.e. icons) must be placed in the Appx folder before packaging. Here the full script I used after launching a Release build :

Honestly Microsoft, how hard would it be to integrate these three simple steps as a custom msbuild step for the wapproj solution ?

After a on-and-off month, I managed to package Dependencies in an installable package. I won’t probably publish it on the Windows Store, since it looks like a hassle (get a CodeSigning cert, apply for Store publishing, etc.) and there is real value in doing that in my case. If you are currently looking into bundling your application in a appx package, I hope this blog post will be of use to you.