How Control Flow Integrity is implemented in Windows 10

This blog post resume a month of work analyzing how Windows has implemented Control Flow Integrity in Win10 build 14393 and 14986.

A lot have been said about CFG, the Windows’s version of control flow integrity. It has been released first in Windows 8.1 Update 3 (KB3000850) in 2014 and had been improved upon since. Coming recently with the Windows 10 Anniversary Update (i.e. build 14393) several new features like longjmp hardening.

The rationale behind CFG is to ensure dynamically that indirect pointer calls jumps to a valid target. Microsoft teams takes advantage of the fact they control the PE executable file format, the compiler and the NT PE loader which acts together to provide runtime check of an icall’s target address.

msvc, the compiler behind Visual Studio, has a link directive /cfguard which, when enabled, will wrap all the indirect calls in a given binary by a call to _guard_check_icall (and on build 14986 by _guard_dispatch_icall). It will also generate a whitelist of CFG approved targets within the given binary. This list is stored in the Load Configuration data directory in the PE header.

The NT loader will, on a module load (see ntdll!LdrSystemDllInitBlock ), parse the Load Configuration entry to look for CFG aware capabilities and, if enabled, will generate a CFG bitmap storing all the valid targets address from the CFG whitelist in the module.

The wrapper function _guard_check_icall is actually a placeholder at compile-time and will be patched by the NT loader on module loading to point to LdrpValidateUserCallTarget to do the actual check.

Currently on build 14393, the load configuration data directory is the following structure :

There is a GuardFlags members specifying which CFG mitigations are met :

They are three optional tables for CFG protection:

Each table is an virtual address to an array of RVA entries concatenated with an optional flag “header” based on which GuardFlags flag is set. In theory the flags header can be up to 8 bytes, but it probably won’t exceed a byte.

The GuardCFFunctionTable table is historically the first CFG mitigations implemented. It protects all the indirect calls in userland as well as in kernel mode. You can dump it from a PE via the following command : dumpbin /HEADERS /LOADCONFIG "some_executable.exe".

Some executables have extended CFG entries (i.e. with a header) in their load configuration, like ntdll.dll or kernel32.dll. The only flag used for the moment in user mode is the bit 0, marking a CFG target as a SuppressedCall.

If you try to indirectly call a CFG approved target containing a SuppressedCall bit flag (like kernelbase!GetProcAddress), the process will crash. If you look at some SuppressedCall targets, you can notice they are not so innocent looking :

It is understable that these “dangerous” functions should be allowed to be called indirectly, but they should be deactivated by default. The function which explicitly activate the call target is ntdll!RtlpGuardGrantSuppressedCallAccess and for obvious reasons is not CFG whitelisted. 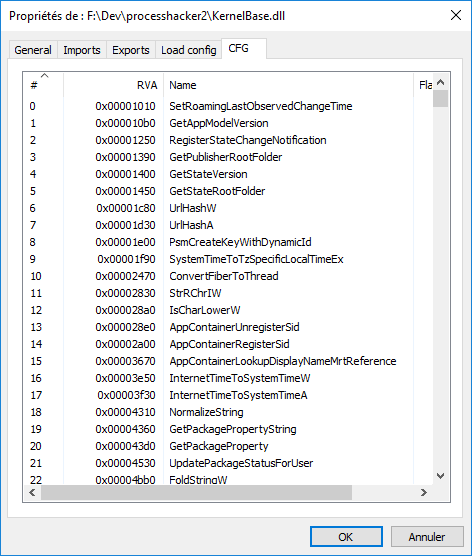 There is also an unknown header flag (bit 1) located in the CFGuardFunctions table entries present only in kernel-side PE's, but I haven’t found the reason behind it or where it’s used.

The GuardAddressTakenIatEntryTable extend those protections by marking some imports as protected through the use of ntosknrl!MiProcessKernelCfgAddressTakenImports. The protection looks like to be done in Virtual Secure Mode (VSM). Since I don’t have a VSM enabled system around, I can’t say much about this mitigation.

If you want to know more about VSM, A.Ionescu bothered to investigate VSM and Hyper-V hyperguard protection here :

The MS CRT (msvcrt, libcmt, etc.) has a non-local goto functionality using _setjmp/longjmp coming from the Unix world which completely bypass CFG by design. Since it’s a legit control flow feature (although I never used it) MS cannot just blacklist it.

Instead, on a longjmp call, the process will call kernelbase!GuardCheckLongJumpTargetImpl which check that the target stack pointer (*sp) is actually located in the thread stack space.

RFG has not been released yet in build 14986. Once it’s out there, this section will be improved. In the meantime, you can read this white paper : http://xlab.tencent.com/en/2016/11/02/return-flow-guard

With CFG, Microsoft and the Windows team has done a tremendous job of raising the bar for attackers to actually use their exploit primitives. Combined with RFG, CFG has the potential of annihilating memory corruption exploits. (well the same thing was also said for ASLR+DEP before popularization of ROP and heap spraying techniques)

One thing to mention is CFG is the second mitigation technique taking advantage of the fact that Windows is an integrated environment, the first being KASLR. It is interesting from a “marketing” point of view : CFG can not be easily ported in a linux since there is a myriad of C CRT running in the same userland. We might see more mitigations techniques based on this uniqueness in the future.

Alas, CFG is not the perfect mitigiation technique (none really are). Firstly it only check the call target, not the call arguments. Secondly, the backward compatibility legacy code does not benefit from CFG until they are re-compiled by a compiler >= VS2015. Lastly, there are already some CFG bypass publicly present on the Internet : https://medium.com/@mxatone/mitigation-bounty-4-techniques-to-bypass-mitigations-2d0970147f83#.a5oytwbnq.

Maybe in the future a new type of generic bypass will be invented (like ROP for DEP) but actually all the existing bypass relies on pretty strong hypothesis (CLR module loaded, etc.). Here is the take of a pwn2own winner on current NT kernel security state and post-CFG exploitation : http://www.slideshare.net/PeterHlavaty/you-didnt-see-its-coming-dawn-of-hardened-windows-kernel