Office is a behemoth of a software suite : Excel itself load 150+ dll at startup, and dozens other dynamically via OLE calls. Among those dll, some are located in a special folder :

Mso20Win32Client.dll is located in a odd looking folder path : C:\Program Files (x86)\Microsoft Office\root\VFS\ProgramFilesCommonX86\Microsoft Shared\OFFICE16\Mso20win32client.dll; VFS probably meaning Virtual FileSystem. I’ve heard previously that certain MS applications were using some kind of a virtual filesystem. I think that’s partly what’s behind Project Centennial, the technology that convert Win32 applications into UWP applications for the Windows Store. I’ve looked deeper into in order to learn more about it.

First thing first, I tried to look with ProcessHacker (and its handle search window) and Procmon which resources are used to store those VFS configuration, but without success. There are hardly any files or “interesting” registry keys touched during Excel startup :

HKLM\SOFTWARE\Microsoft\AppVISV\C:\Program Files (x86)\Microsoft Office registry key returns 8a115c93-df1b-47c9-9a9c-a185cf477896, which looks like a GUID, but nothing else in the registry hive reference this GUID.

I decided to trace the import of Mso20Win32Client.dll via Windbg in order to see how the loading is actually done. ntdll!ShowSnaps is a static variable - not exported but available via pdb debug symbols - which activate NT loader debug outputs. It is also accessible via gflags but I always forget the correct command. Here are the results :

Several interesting infos here : first, the loader has detected a “detour”, which is the name of a library Microsoft recently open-sourced to hook natives API. The other is that the loader thinks it loads C:\Program Files (x86)\Common Files\Microsoft Shared\Office16\mso20win32client.dll whereas it actually loads C:\Program Files (x86)\Microsoft Office\root\VFS\ProgramFilesCommonX86\Microsoft Shared\OFFICE16\Mso20win32client.dll !

The solution to this phenomenon becomes pretty clear by looking at NtOpenFile (called during a dll load before memory mapping the shared library) :

AppVIsvSubsystems32.dll seems to hook quite a number of ntdll APIs. AppVIsvSubsystems32.dll is a dll located in C:\Program Files\Common Files\microsoft shared\ClickToRun, but described as being part of a tech stack called Microsoft Application Virtualization (App-V). Below is the hook placed for ntdll!NtOpenFile : 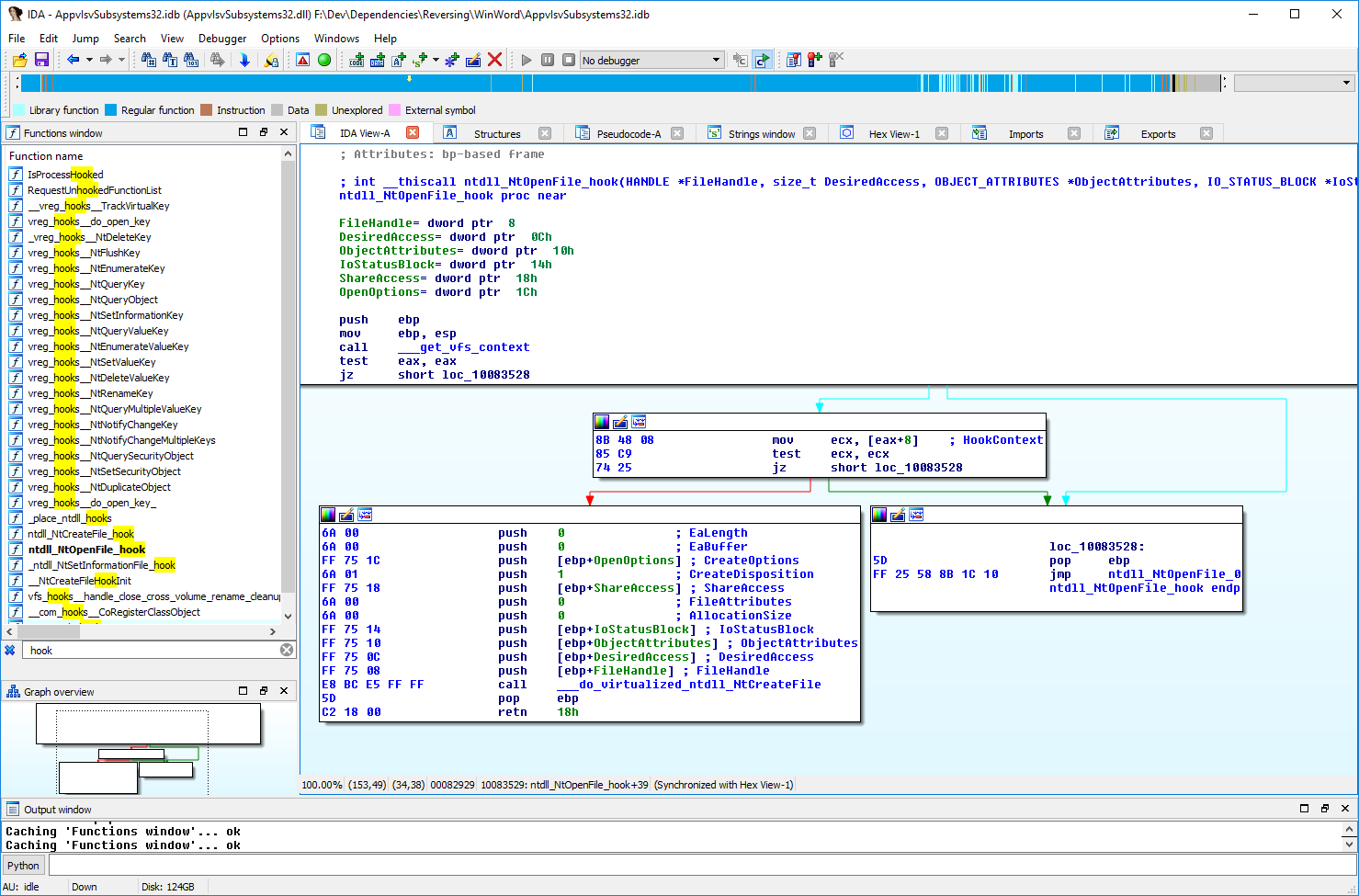 Since I don’t have any more informations, IDA was my only “friend” for now on. Unlike many Windows binaries developed by Microsoft, AppVIsvSubsystems32.dll symbols are not publicly available. Fortunately, there are debug strings and RAII peppered in the code base. Unfortunately, it also means it a C++ code base to reverse, with std calls; try/catch statements and lots of function pointer calls.

Among all the debug strings present, some stood up :

AppVIsvSubsystems32.dll seem to make RPC calls to an endpoint called SFT-venv-server in order to retrieve new environment variables. In order to identify which process holds the SFT-venv-server RPC endpoint, I used RpcView : 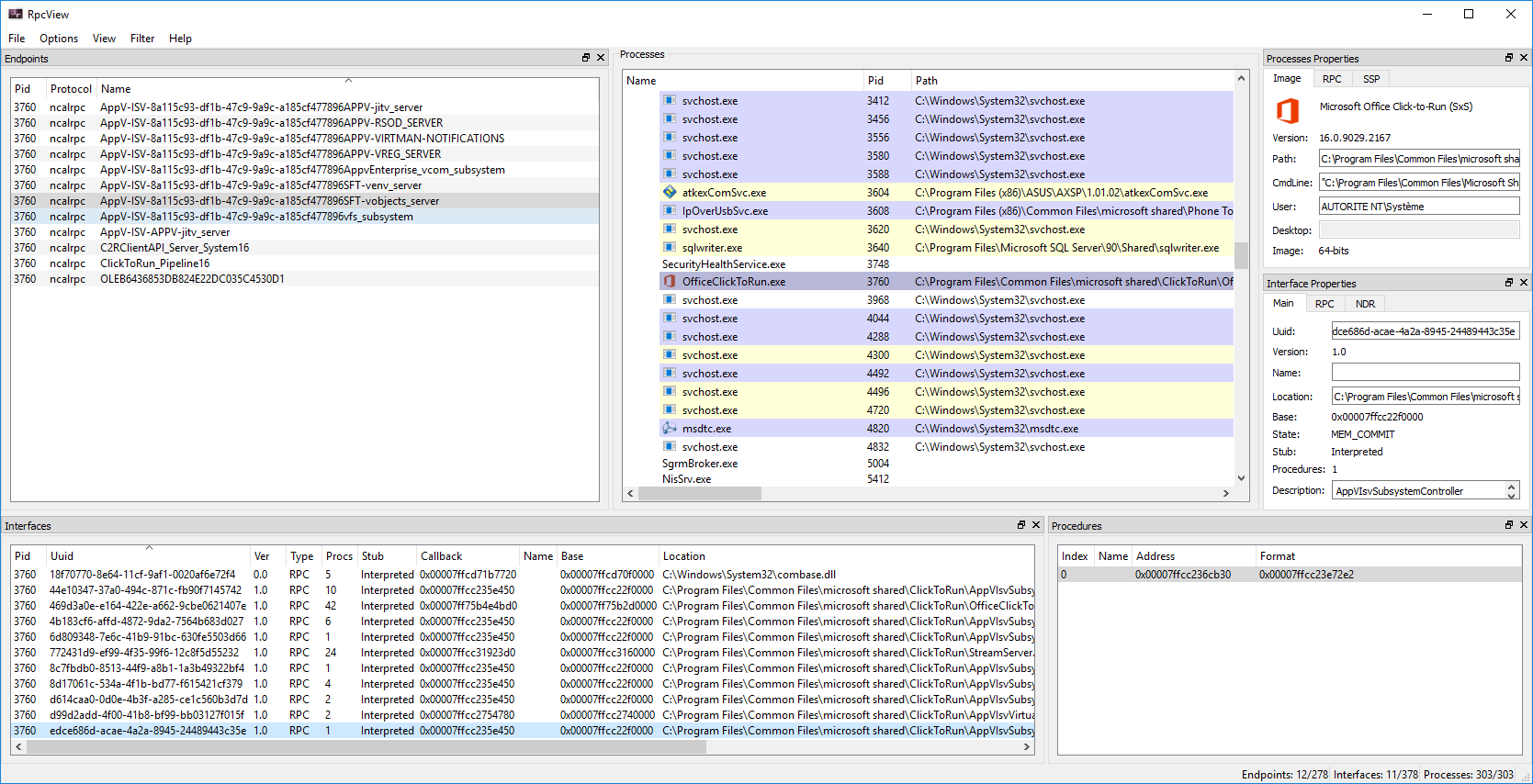 SFT-venv-server RPC endpoint is located within the OfficeClickToRun.exe process, and actually prefixed by AppV-ISV-8a115c93-df1b-47c9-9a9c-a185cf477896 which is the GUID read from the registry at startup. RpcView also list all the RPC interfaces bound to the various endpoints within OfficeClickToRun.exe, but none of them are documented. I’ve identified interface edce686d-acae-4a2a-8945-24489443c35e as the one used to update Excel’s process ENV variables. Here the decompilation returned by RpcView :

Struct_8_t / Struct_12_t is probably an uuid / GUID. It fits exactly with IDA’s description of a GUID structure :

Now that I know the RPC procedure prototype, I know how to read client-side rpc calls :

Following the RPC call edce686d-acae-4a2a-8945-24489443c35e:Proc0 which updates the PATH environment variable, AppVIsvSubsystems32.dll calls 8c7fbdb0-8513-44f9-a8b1-1a3b49322bf4:Proc0 which will return all systems folders redirections. Here is the interface’s decompilation result (and annotated) :

We get the following redirections :

When loading a shared library, if the resolved filepath is located in these particular folder, AppVIsvSubsystems32’s hook will try to swap the system dll by the VFS one. But where this VFS configuration is located ? Once again, Procmon is a big help on this :

At startup time, the ClickToRun.exe process read files from C:\ProgramData\Microsoft\ClickToRun\MachineData\Catalog\Packages\{9AC08E99-230B-47E8-9721-4577B7F124EA}\{1A8308C7-90D1-4200-B16E-646F163A08E8}\, in which there are 2 XML manifest files describing the entirety of an AppV configuration for Office (shortcut, file extensions handlers, COM interfaces, ENV variables, etc.). For example, one entry updating the PATH ENV variable :

This dll redirection is way too complicated for me to attempt to emulate it : to do it properly I would have to read a registry key, locate the RPC endpoint associated, spawn the executable to analyse (most RPC procedures here works using PIDs, not executable paths) and make two or three RPC calls in order to retrieve the folder redirections. Instead, I choose to display a warning popup.

Now we’ve seen how folder visualization work, we can take a look at all the RPC interfaces ClickToRun.exe expose to the user.

Proc1 of d99d2add-4f00-41b8-bf99-bb03127f015f is actually an interesting one since it takes a process PID and a binary name, and at first glance seem to load the binary into the remote process. However there are no injection done here (at least none visible via reverse engineering). I think it’s more an orchestration thing where the rpc server signal an “enlightened” remote process to load the binary, but it’s up to the target process to do the actual loading.

Here below are all the interfaces and procedures available via ClickToRun.exe’s process: